Focusing on Burma through a lens 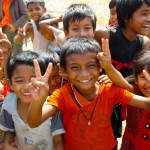 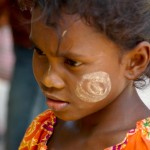 On November 6, 2010 a battle broke out about three miles from where I was staying on the Thai-Burma border. It was the day after the Burmese election, which was a fraud attempt to release the country from their military dictatorship they have been under for the last 60 years. The battle took place in a town called Myawaddy, between the government’s army and a rebel army called the DKBA (Democratic Karen Buddhist Army). The citizens of Myawaddy fled across the river, that made up their country’s border with Thailand, to flee the fighting, and they moved into a temporary refugee camp about a mile down the road.

Reports say that at least 20,000 people streamed into the makeshift camp over two days. When I visited it on the Tuesday after the Sunday election, I saw with my own eyes the masses of people living in tents made from blankets, and lining up for bottles of water and medical care. It was somewhat hard to grasp the fact that everyone here has left there home in minutes caring nothing but each other and the cloths on their backs. Several large tents were set up in a field and hundreds, possibly thousands of people were sitting, talking, sleeping, eating and waiting. Whole families where huddled around on rice-mats not moving too much so as they wouldn’t loose their place. The lucky ones had their own camping tents, and were keeping to the shade.

Because of its closeness to more permanent refugee camps and the border, the Thai town I was staying in is known to be home of many westerners who are there as volunteers or journalists. So when this camp popped up literally overnight there were no shortage of TV hosts and medics roaming around helping out where they could, and broadcasting the news to the rest of the world. My view was a little different though; I went along as a spectator more. Not knowing what to expect, I packed my camera bag, jumped on my bike and made my way down the road.

Out of these thousands of people, the ones I got to know were the children. It seemed as though to them this was an adventure. They were able to just run around and play with their friends with no restraints on their time. When I broke out my camera and started taking pictures they slowly made their way in groups of two, three, four, to my side so they could get a chance to have their picture taken. As I snapped the shutter they laughed and flashed smiles at me. They held their hands up next to their faces and reached out towards my lens. The longer I stood there, the bigger the group got. Young girls and boys dragged their little siblings by the hand and carried them on their hips towards me, and pointed at the camera then at them. They don’t have many chances to get their picture taken, and it could be that it’s been months since they have seen a foreigner since the border has been sealed.

Mothers ask me to take pictures of their daughters and I willingly do it, their smiling faces look at me through the lens. One little girl is too shy to have her picture taken, but the way she determinately stares back at the lens shows me that she wants to be remembered in more than just a photograph. She wears an orange dress and her face is decorated with the yellow face paint the Burmese use as a sun protector and a beauty product. Her skin is darker then most of the other kids and her glossy brown hair is tied back in a ponytail.

Another boy I nicknamed the Model. He couldn’t have been more than eleven or twelve years old; he wore a yellow shirt and khaki pants. He insisted in being in front of every picture I took and kept insisting to have pictures by himself. He would hold up one finger and say “one!” then point at himself. I would snap a picture and then he would strike another pose and on it went.

The only thing I regret about all of this is that these mothers will never see the pictures of their children. Sure, some of them have cameras back at home, if their home survives the fighting, or they have pictures of family members, but some of them may not, and this could be one of the only times they stand in front of a camera.

Maybe that’s why they are so excited to get their own pictures instead of the group shots I ended up with mostly. Every once in a while one of the little boys would point to themselves and step aside from the group, and I took this as them telling me they wanted a shot by themselves. Unfortunately, most of the time I would point my camera in their direction and everybody else would all shuffle over in that direction, falling over each other and giggling hoping to be in front this time.

My camera. That was what gave me a glimpse into the life of these people. That gave me my view of the people who lived across the river in a tiny town. People that had lived their whole life under a dictatorship who kill those that defy them, where they had to cram onto boats to get across the before- said river to flee grenades and burning buildings.

Looking out at the world through my 28 mm lens, I was let into a few hours of the life of kids that lived a life I could never imagine and they could never image the way of life that I lived. They pushed themselves closer and closer to me, trying to be the subject in my line of sight, while I kept having to back up to keep them in focus, to make them understandable.

There were dozens of them and one of me, and while I wanted to meet them and get to know them there was the fact that there was no spoken language we shared. We had to use our shared love for the camera, me as a photographer, them as a bunch of school age kids, communicating by laughter and hand gestures.

I wanted to take a picture of each and every one of them, and be able to give them to them. As a memento, not as one of me or of the white girl with the camera, but as an afternoon where they laughed the whole time and ran around. Where they were able to keep enough food in their bellies and have fun while doing it. Most of them have gone back to their real home, and I know I won’t ever again see their faces that live forever in my computer.

Later that same day my mom went out to the border to take pictures of the refugees crossing the river. As I was looking through her shots that night I see my little orange dress girl. She isn’t looking at the camera but I know it’s her. I don’t know her name and I know I will never see her again even if she survives the fighting that still goes on in her town. I wonder if her house survived the burning, if her whole family escaped in the first place. I hope with all my heart she makes it through, and lives to see her country come free. Selfishly though I wonder if she will remember the time she spent laughing on the cement wall with that group of kids and the strange white girl with the camera.